May I start by saying how difficult this was. It is relatively impossible to narrow down every single moment in the history of baseball to five. So, as usual, this is completely my opinion and is subject to debate. 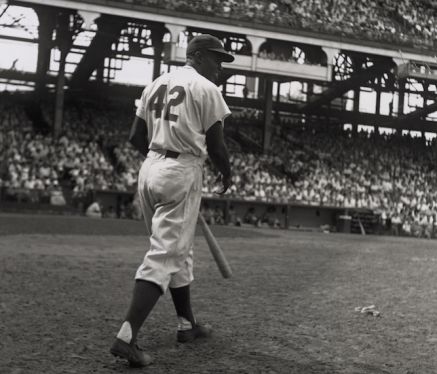 This was no less than impossible. No moment in the history of sports will ever touch the importance and the power of this one. And that is because it had nothing to do with sports. This moment meant so much to the Civil Rights movement and to American society. The fact is, if it weren’t for Jackie Robinson, the entire world would be different.  This game, and what it means for the country, is a true testament to sports and baseball, and how utterly important it is to our society. It’s the national pastime, and will forever have a place in our country’s history thanks to Jackie Robinson.

There is nothing quite like this. In Game 3 of the 1932 World Series, Babe Ruth stepped up to the plate, pointed to center field, and then blasted a home run. Or did he? No one actually knows for sure. Many say he pointed to the wrong part of Wrigley Field, or he pointed at the pitcher, or he didn’t point at all. That isn’t the point (ha ha). The mythology created from this moment has fallen into baseball lore. It is the classic baseball story, because it truly captures the magical brilliance of baseball. It is the crown jewel of baseball stories.

As a kid playing in the backyard, I imagined so many heroic baseball scenarios for myself. But, like everyone else, I always went back to this: tied, bottom of the 9th, Game 7 of the World Series, and you hit a walk-off home run. That has happened once in baseball history. In the 1960 World Series, the Pirates and the Yankees were tied in Game 7 when Bill Maz stepped up to lead off the ninth. He proceeded to crush a ball over the left field wall and achieve the Pirates’ ultimate storybook ending. It was the true baseball dream.

In 1952, the New York Giants and the Brooklyn Dodgers had become locked in a heated race for the pennant. In August, the Giants trailed the Dodgers by 13 and a half games. Yet in a miraculous series of events, they forced a 3 game playoff to face the Yankees in the 1952 World Series. The Dodgers, after losing the first match up, forced Game 3. The game was the center of the world at the time and became the first-ever nationally televised baseball game. With millions watching, down 4-2 in the bottom of the ninth with 2 runners on, the Giants’ Bobby Thompson nailed a line drive down Polo Grounds’ short left field line, giving them the 5-4 victory. The event became known as the “shot heard round the world.” Listeners and viewers around the planet heard Giants radio announcer Russ Hodges belt his famous “The Giants win the pennant! The Giants win the pennant!”. 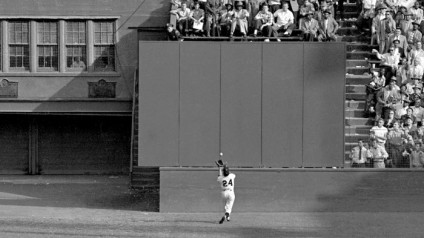 Just two years following Thompson’s homer, another Giant made his case for the single greatest moment in baseball history. In Game 1 of the 1954 World Series between the Giants and the Indians at Polo Grounds, a young center fielder by the name of Willie Mays made what is commonly known as the greatest defensive play in baseball history. Polo Grounds is an unconventional baseball stadium, with short porches down both lines, but a staggeringly long 450-foot fence in deep center. With the game tied in the top of the 8th, the Indians Vic Wertz hit a loooong fly to center field (approx. 420 feet), that would surely score the two runners on base. Mays, playing relatively shallow, raced an incomprehensible distance in such a short time and gathered the ball just before the wall, twirled around and launched it 300 feet to double up the man at second base. The play was so good, it arguably defined May’s career, a career that is generally considered to have been one of the greatest of all time.